Ivana Šáteková: I am Slovak and I will be Slovak

In her witty talk, Ivana describes typical features of Slovaks which are often idealized and far away from reality. Through her art she destroys the myths about Slovak hospitality, geniality and she answers the question what is the current visualisation of Slovak folklore. 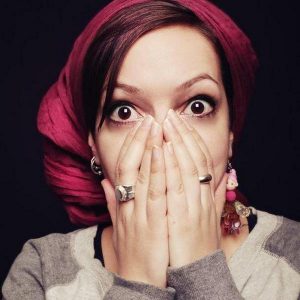 Ivana was born in 1984 in Bratislava. She is a graduate of the Academy of Fine Arts in Bratislava, the Department of Painting and Other Media at Professor Daniel Fischer. In 2013 she was the finalist of the Slovak round of the Essl Art Award CEE. In 2014, she was awarded the Tatra banka prize for art, for the exhibition I am thirty and I have no plan, exhibited in the Danube Gallery, in which she ironied the present generation of thirties, their superficiality and their “obstruction” in their own lives. In her work she uses painting and drawing inspired by comics and photographs found in books or the internet, but she also works with other media. Typical for her is the uncompromising humor, and irony that she expresses on topical social issues. Her favorite themes include folklore and folk traditions that she connects with the world today, and on the basis of which she demasks some deeply rooted paradoxes and absurdities in Slovak society. She is a member of the Dzive drawing trio.