Through her personal story, Eva Mosnakova shows us how even the worst experience may make us stronger. She also reminds us how important it is to use this strength in the effort to protect the principles of humanism, democracy and mutual respect. And that it is possible even at the age of 88. 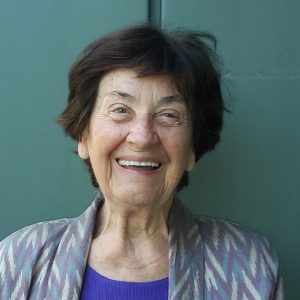 She was born in Brno in 1929. Her father came from the Jewish burgess family, mother from craft-peasant Czech family. After the suppression of the Slovak National Uprising, she hid with her parents at the farmstead Laciház of brave husband and wife of the Conrads family. After Slovakia was occupied by Germans, her family was threatened because of their Jewish descent. Dramatic events occurred when SS-man Zimmermann from the Seredi Concentration Camp came to Močenk to search for the hidden Jews. The family had to leave a safe hideout at Laciház. The brother of their rescuer’s wife cared for them. He became her husband after the war. Even in post-war years, her life was marked by a new dictatorship. The husband was unjustly sentenced to the uranium mines in Jáchymov. Her fate was so markedly marked by the noble, brave people who inspired her to – as opposed to hate speech, greed and lies – to the grace, to help others without the right to reward, to the side of truth and humanity.